Challenge: Industrial Battery Products' branches had a lack of visibility into battery status, and disconnection from SAP Business One, which caused a series of problems. Each branch took a somewhat different approach to managing the comings and goings of batteries being rented, sold or maintained.

If you look around the room, most of what you see has moved through a production facility, transportation hub or warehouse at some point.

That’s why Sam Sauer likes to say, “Pretty much everything around you has touched a forklift.”

Sauer’s company, IBP and its 75 employees play a big role in keeping all those forklifts running. Based in St. Louis, IBP distributes, maintains and rents-out batteries used in forklifts, along with chargers and other equipment, serving customers in 12 Midwest states through five branch offices. 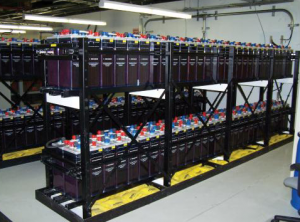 When Sauer first joined the company as Rentals Coordinator, battery rental transactions ran through her, using the SAP Business One software system the company had implemented in 2009.

“Because I was the only one with this visibility,” says Sauer, “it was hard for our five branches to get a good grasp on what’s out and when it’s available.”

The branches’ lack of visibility into battery status, and disconnection from SAP Business One, caused a series of problems. Each branch took a somewhat different approach to managing the comings and goings of batteries being rented, sold or maintained – creating data that may or may not match what Sauer saw in St. Louis. To avoid disappointing customers, branch coordinators would frequently phone or email Sauer to confirm product availability before finalizing quotes or writing sales or rental agreements.

“It was an excess of data entry that wasn’t necessary,” says Sauer, “and nothing was all linked in the same place.” In 2016, when Sauer was promoted to Business Systems Manager, she set out to bring everything under one unified system and give the five branches the same visibility as Head Office.

Sauer contacted VistaVu Solutions, the same SAP channel partner that had worked with IBP on its original SAP Business One implementation. VistaVu recommended FieldVu, its own field service and rental software solution built on SAP Business One.

The implementation process began in February 2017. Still, Sauer was worried.

“I was very scared that something was going to go wrong,” she recalls. “Every project I’ve worked on in the past – not with VistaVu, but just anything else — you get all these bumps in the road. I just thought I was going to have a big learning curve.”

As implementation proceeded, Sauer kept waiting for something to go wrong. It never did. The implementation occurred how and when VistaVu had promised. In May 2017, 10 IBP staff members in its five branch offices went live with FieldVu.

As Sauer explains, having branch staff running FieldVu overcame all the operational problems they’d been experiencing just months before.

Staff can easily track the comings and goings of batteries. All those calls and emails to Sauer to confirm if a given item is available are no longer necessary. Previously, it might have taken a day to assemble a detailed sales quote. With FieldVu talking to SAP Business One, branch staff can process sales quotes roughly five times quicker.

“We like that it’s woven into SAP itself really well,” says Sauer. “Our sales people can look and say, ok we can get you this today, it’s at this branch, now I’m going to call a carrier. They can see how many we have, the ages of them, and do it right from their computer, instead of calling or emailing and waiting for someone to get back to them. So I would say it creates sales, because now we have speed on our side.”

Before adding FieldVu to SAP Business One, Head Office had its own view of IBP’s inventory but branches could have a different understanding. Now, there’s one version of the truth and everyone can see it. Previously, IBP would do a full inventory several times each year – at significant costs of time and staff – but now requires just one annual inventory. With FieldVu complementing SAP Business One, Sauer also reports that invoicing now takes one hour less per day than before which adds up to 260 hours per year.

As IBP’s new Business Process Manager in 2016, Sam Sauer wanted to bring operational visibility to the company’s five branches. Even so, previous experience with bumpy software roll-outs gave her cause for concern.

VistaVu Solutions delivered a quick, smooth, well-communicated implementation. Since then, FieldVu has performed entirely as promised.

“I just kept waiting for the next shoe to drop, but really, our team at VistaVu had everything under control,” Sauer says. “Whenever I had any questions – at any time of the day – they would answer right away. They had it so organized on their side, it was pretty hard to mess things up on our side.”

We use cookies to ensure that we give you the best experience on our website. If you continue to use this site we will assume that you are happy with it.Ok